... on the days spent with Pete and Freyja in Vietnam.

They've posted their photos on Facebook and I really wanted to share this one also with those of you who are not on FB. :) 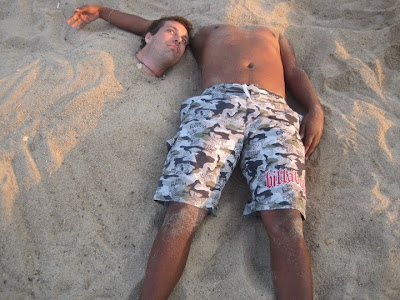 I'm slowly saying goodbye to Vietnam and moving on. Sure there is more to see and more to do and I was thinking of extending my visa and skipping Laos. But decided not to...

Sapa and Halong Bay were amazing although very turisty. But especially in Sapa you can steer of the beaten track quite fast and have some peace. :) I also met some interesting and nice people to keep me company during these days - interestingly enough they were all north american.

But I also met another Slovenian - when we were watching football (English premiership) he came to me and told me that "they" will beat "us" in the world cup!?! That aside they guy turned out to be a loose cannon... I wanted to write a whole rant on this topic but I decided to keep it in my notebook. All I will write is... I'm a human being first. And then I'm a member of my family. And then I'm defined by my close friends. And only then do other kind of attachments like nationality come into place. Therefore, if you are Slovenian, but an idiot (according to my own, for many other people probably wrong standards) I do not feel any kind of need to spend time with you!

Anyway... you have new photos uploaded.
Posted by Knežan at 5:30 AM No comments:

As my dear friend says...

... sometimes the air valve faces up and sometimes it faces down (I know, I know... even most Slovenians will find it strange :)).

The days in Hanoi were up and down... after the initial news that my parents are delayed I spent the evening with Pete and Freyja before they departed for Bangkok. Bia Hoi (15p for one) on the side of street with the small chairs spilling out to the crossroads. But the joy is often interupted by passing of the police as everybody has to pick up their chair and cram on the pavement. But hey, minute later everything is back to normal. We ended a night in a lock in bar and then tried to find our way back home. In the end we all three took one cyclo with Pete sharing the driver's seat with the guy and draging his feet on the ground.
The next day was spent searching for updates about the big bad vulcano and it's ashes and ended in the decision that family isn't coming to visit. When the decision was made final it was the first time that I felt alone. I walked out of the crowded and noisy internet hallway towards the room feeling rather lousy. But I didn't have to walk long until an old guy called me back for tea by the side of street. A fascinating guy who travelled most of the world and also knew how to curse in Serbian. Had a couple of cups of tea with him and a phone call from UK my spirits were once more up and wanting more. Speaking with the guy it turns out that he called after me because of my "happy pants" or "clown monthly trousers" or whatever you want to call them... photos to follow in the next batch :)

It's a big shame that family didn't make it but there is nothing any of us could do about it. C'est la vie and I'm heading to Sapa on the night train.

And to finish a story on how to outweasel a weasel :D I was buying weasel coffee which is quite expensive and it is quite difficult not to get piiiiiip. But since I'm used to eating coffee beans I played the role of an expert, took a bean and ate it. Hmm... not quite the right quality is it? He smiled, brought a different vase from behind the counter and gave me a lower price than quoted for the previous one straight away. We had a cup in his shop and it was good.
Posted by Knežan at 12:01 PM 1 comment:

After planning the moment in my head for a year, arriving to the meeting point, already gathering information for the coming two weeks and being childishly excited about the arrival of my parents and brothers tomorrow morning, I got a text for my dad. They are stuck in Vienna - airport was closed a couple of hours before they were supposed to take off! :( I really hope that they reopen the airport tomorrow and that they can make their way here!

But as promised I found time and uploaded 3 new albums to my coloured moments page.

Over and out from Hanoi - going for food and coffee
Posted by Knežan at 9:00 AM 2 comments:

... more the way I like it. Don't get me wrong... I liked the hustle and bustle of Ho Chi Ming City, but outdoors and sports are where I feel much more at home.

A very quick update, but I promise photos this week (hopefully I'll manage) :)

1) From Ho Chi Ming City I headed to Dalat which was superb. Rented motobikes and enjoyed the magnificent roads which are still under construction and suddenly turn from an empty "highway" to a proper badly maintained dirt road. Dalat is the place of veg, flowers and coffee for Vietnam.
2) Went canyoning and although the canyoning there means less water sliding than in Slovenia it involves a lot more adrenalin. Huge waterfalls with loads of waters, big jumps... you'll see what I mean when I get a chance to put up photos.
3) Cycled most of the way from Dalat to Nha Trang (total is 140km, I did the first (the hard) 95 km). Brilliant scenery (mountains - yes, yes, up and down; coffee plantations; small villages with children running with the bike) but I was shattered at the end... heat did not help one bit :P
4) Met Pete and Freyja in Nha Trang and after a relaxing day we went diving together. Much better diving than Cambodia... nice corals and fish and amazing caves with swim through passages.
5) Night bus to Hoi An. Charming old town which seduces with its calmness and friendlines. I think I'll stick here for a couple of days.
6) Hoi An is also the place of tailors... it is good that I got rid of most of my suits and shirts before I left... For those who've been shopping with me before you know how peculiar I am about what I want. Now I can get it! And cheap! I just have to control myself in order not to get way too much stuff :)
Posted by Knežan at 11:15 AM No comments:

Ho Chi Ming City ( or Saigon - depending which Vietnamese you are speaking with) is one of the most bustling cities I have been in. Cambodia had empty roads comparing with this. But crossing roads here is much easier... you just walk very slowly across and they avoid you. Simples. :)

The other game is called "How many scams will they try to get you into today" and you really need to be on the ball all the time if you are alone. If you are with other people there is no problem. But the moment I'm alone I get people next to me trying to convince me 100 different things - from being part of gambling scam in Saigon and then on the boat going to Hanoi, to taking some strange one day trip and buying medicine. And also the moment I started walking around alone again I strated being offered drugs. :)

I'm spending one more day here and then hopefully the intensity will decrease and things will go back to a more relaxed state. Not that I don't like it... but it is just a bit too intense for my current state of mind. :) But otherwise I love it. It has everything to offer and it is surprisingly clean and developed. Replace motobikes with cars and street stalls with trash cans and you could almost be in a hot western city.

P.S.: I splashed out and bought a camera! Bought same as I had before and paid for it the same as more than one year ago in London.... amazing... and no, I didn't overpay it comparing with locals! :o

Mum, thanks for correction of my number :D
Posted by Knežan at 1:10 PM No comments:

The last days in Cambodia were amazing. Went to Kampot and the lazy seaside resort of Kep. Both places are ex French resorts and also noticably richer than the rest of Cambodia.

1) Trekking in jungle to the Bokor Hill station which is an abandoned hotel and casino built at the begining of 20th century. Although the trek was only 4 hours it was one ofthe most intense walking things that I ahve done. The path was not even properly cut out and we got lost with the ranger (well.. they were still cutting the path through the jungle) a couple of times. The top view was amazing... calm,the mist raising from below, really tranquille.

2) Kep is small seaside place with brilliant crab - they keep them in cages in the sea in front ofthe restaurant so they are as fresh as they get! :) Kampot and Kep are also known for pepper and we went to see how pepper is grown and then different pepper made.

3) First impressions of Vietnam
Beautiful country but you really need to be more on the ball then in Cambodia. People are much more money driven. And we managed to fall for a scam from the word go! :) Looking back it was bloddy obvious that it is a set up!!! When we arrived to the bus station we were told that the bus has already left.... hmmm... where can we go. Oh no, you could catch another bus, but we would need to take you 10 minutes away to another village. OK, negotiated the price for the drive and left. Set at a road side cafe (yeah... why the hell would they bus stop there?!?) and chatted with the guy. The bus arrives and the all the laguage and everything was on and there was imense hurry.... and the price... let's say well overcharged. But hey... lesson learned. Klemen should not trust people until they prove him wrong on the road!! :)

today we went to see the floating markets on the Mekong and it is nice to just drift around on the river and the canals and observe the life on the river and by the sides on the country side.

4) I'm writting we as I have been travelling with an English girl and with a French guys (up to Vietnam). She is very relaxed and easy to travel with...

5) Facebook is blocked in Vietnam so... don't write to my wall and can someone fwd me anything from my wall I should know about :)

7) Camera prices are extortionate in Vietnam and there is *no* *way* I'm paying more than in UK. And they don't really seem interested to sell. Maybe I'll have more luck in Ho Chi Ming City (ex Saigon). If not, I'll take photos from other people until family arrives to Hanoi mid month.
Posted by Knežan at 12:44 PM 1 comment: